Diskuse
Hi to All,


I would like to ask your help to ID this switch!


This is a metaldetector find from a WW2 field-airport. The Brano company dated the find from the WW2, or the pre-WW2 era and even the oldest, ex-workers do not remember this piece. Their archive does not contain any info about this switch - they explain it with that there are no product lists from the WW2, or the pre-WW2 era when the factory had foreign owners and during WW2 it was under the German Army's supervisement.


Please let me know what this switch's function was and where had it been used if you know!


Thank you very much! 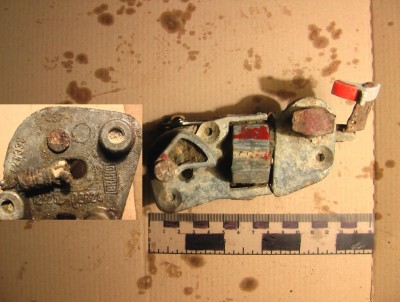 
As I could figure it out by the Google Translator you say that it is a kind of door remote operator?


Pull and turn the oval shaped button on the right, this way
you can turn the red/white topped lever underneath the edge of it to be fasten. In this position there was a way to use a pin, or plomb-wire to secure it. The switch in the middle is connected to this mechanism, but I did not figure out that yet when was it possible to press it down: if the system is secured or not. I also have no idea about the function of the rotatable third switch yet.
URL : https://www.valka.cz/Question-BRANO-switch-ID-t114214#397818Verze : 0
gebirgsjager před 9 lety
Oh right, bitaxe,


Now I got that what kind of hydraulic door closer mechanism you mean! :]


Well, honestly I see absolutely no similarity... :[ I'm sure it is something different. Concretely a switch for securing something to be turned on, or off, but this is only my opinion.


But really many thanks for your kind effort!

Firm "Brano" is czechoslovak firm for door equipment, and this firm was bought in 30´US firm YALE, in this time Brano start made hydraulic closing door. 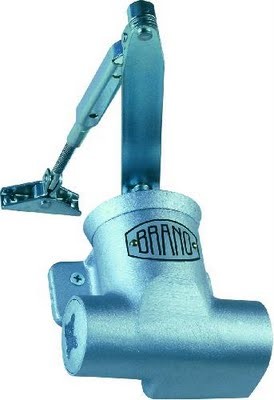 
The BRANO a.s. history goes back to 28 October 1862 when a factory for small ironmongery was established. The most important milestones in the further company’s history were the following:


1867 – The factory transformed its statute to public trading company, owned by C.R.O.Schüller and Co., Opava.


1869 – On 30 December the company was transformed to stock company Branka Factory on Wire, Tinwork and Nails located in Opava. Along with the growth of the company the production assortment was enlarged from nails and heel tips to metal sheet and cast iron ware and iron structures of windows, roofs, railings and bridges. This expansion was supported by the newly built foundry.


1927 – The factory was taken over by the American company YALE and Town Manufacturing Co., Stampford. The mass production of various types of locks, hydraulic door closing devices, rack-and lever jacks and other products of advanced technology has been introduced.


1939-45 – The production programme was adjusted for the purposes of German Army.


1946 – The company was nationalised under the name Branka Ironworks n.p. (national enterprise), Branka u Opavy. The factory produced padlocks and mortise locks, construction fittings, and castings made of grey and malleable cast iron.


1948 – Further plants from all over the republic were integrated into the company structure.


1950 – The production was expanded for furniture and construction fittings, closing devices, cast iron and car locks.


1965 – The boards of management of industrial enterprises are being established according to production lines. Branka Ironworks are incorporated into the consumer goods trust PRAGO-UNION Prague.


1970 – The production for automotive industry was enlarged for further components.


1972 – Licence for car safety locks BOMORO I and BOMORO II was purchased. The production for automotive industry and that of lifting and door closing devices is being developed and enlarged.


1991 – Repartition of subordinate plants in Horní Benešov and Opava-Komárov that became independent.


1992 – On the basis of the privatisation project accredited by the resolution of the government of the Czech Republic from 15 April 1992 was established BRANO a.s. on 1 May, business location Hradec nad Moravicí. The same date was the company registered in the Commercial Register at the District Court Ostrava. 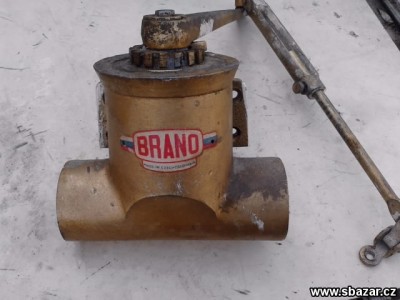 
I am researching this find since 2 years now without any result and I have already came across this company history on Brano site.


I was contacting with Brano and as I wrote in my first comment under the picture: even they did not know what this is. :]


Thanks a lot to you as well for your help! 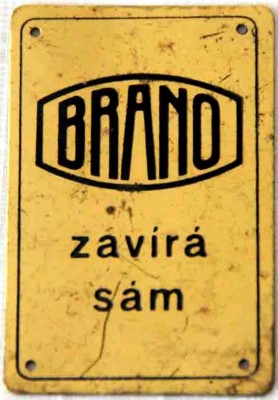 
Fortunately I found valka.cz by your nickname! :]


I made a try again to find any news on the find typing "brano" into the google search bar...


I recieved this new letter from Vojensky Historicky Ustav, Praha today and it confirmed my first, security switch impression:


the images which you sent to us shows the most probably the mechanism of bomb rack lock.
Any way we could not recognise the precise type.