Diskuse
I am a long time passionate collector of Czechoslovakian paratrooper uniforms and equipment. My closest friend's father was a commando in 7. výsadkový pluk - Holešov and I am currently writing a book on his experiences in the unit.


Can anyone help me with photos and historical information about this unit as well as Czechoslovakian paratroopers in general during the Cold War/Warsaw Pact era?


The two main subject areas that I ask forum members to assist me with please are a) the types of uniforms and equipment used by these elite troops, & b) the type of training and exercises they had jointly engaged in (if any) with other Warsaw Pact countries.


I have not undertaken this project for profit. My only aim is to satisfy like minded enthusiasts out there who currently hunger for information on this fascinating but little known topic.


Your knowledge and material on this subject will be greatly appreciated.
URL : https://www.valka.cz/Czechoslovakian-Airborne-t75341#277828Verze : 0
Rafski před 12 lety
We will try to help as much as we can. Let me first translate your post to czech language so others can understand, and please watch this topic for any updates we might have for you


Vase znalost a podklady na toto tema jsou velmi vitany.
URL : https://www.valka.cz/Czechoslovakian-Airborne-t75341#277885Verze : 0
Admin MOD před 12 lety
As I know, city of Holešov published some book about this unit just about one month ago. The name should be "Osmašedesátý" (sixtyeighth) by František Sovadina. In that book should be some informations about above-mentioned unit and especially about its role during August 1968.
I can try to collect this book and we´ll try to find some way to tranfer it to you.
Unfortunately, I´m sure, it is in Czech and afraid, I´ll not be able to translate it completely to English.
URL : https://www.valka.cz/Czechoslovakian-Airborne-t75341#278501Verze : 0
Tars před 12 lety
Some information about uniform ad eqiupment are in publication "Výsadkáři a průzkumníci Československé a České armády 1945-1999" (Michal Koníček, Petr a Pavel Blahoutovi), ARES / Naše Vojsko 2001 (czech language)


I actually own a copy of Výsadkáři a průzkumníci Československé a České armády 1945-1999 - it is a fantastic resource, particularly for its detailed photographs.


Tars, you mentioned the book Osmašedesátý. From what I can understand this book broadly covers all events during the Soviet invasion. Are there any publications that you guys know of other than Výsadkáři a průzkumníci Československé a České armády 1945-1999 that particularly detail - in photographs - Czechoslovakian Airborne forces?


To assist in illustrating my friends story of his time in the unit, I want to photograph re-enactments of scenes described by his experiences. To do that I would like to also learn from actual photos documenting the uniforms and equipment used by the Czechoslovakian airborne during that era. I have a small collection of such uniforms and equipment, and I want to ensure that my re-enactments are as close to the truth as possible.
URL : https://www.valka.cz/Czechoslovakian-Airborne-t75341#278752Verze : 0
Rafski před 12 lety
Hi,

I can recommend these books:

but there are a few informations about 7th special airborne regiment from Holešov only because there was an intelligence unit (like LRRP or "Green Berets").

You can contact me via PM to share information about topic.
URL : https://www.valka.cz/Czechoslovakian-Airborne-t75341#278753Verze : 0
gruppe.drei MOD před 12 lety
Thank you gruppe.drei.


Now both Tars and yourself recommend Osmašedesátý so I'll have to see if I can get a copy. Please let me know how you can help Tars, and thanks once again for your offer.


What I know so far from my interview with one of the regiment's veterans is that the 7th Paratrooper Regiment was considered to be the Czechoslovak Army's most elite unit when it was fist established in 1961 until its Soviet ordered disbandment in 1969.


Under a World War Three scenario, their theoretical field of operations was to extend 800km deep behind enemy lines into West Germany and the mighty river Rhein on the Swiss/German frontier.


Their mission would have included:
- long range reconnaissance and intelligence gathering
- destruction of bridges, railways, roads, military objects, etc.
- destruction of airfield facilities and aircraft
- destruction of guided medium range missiles in situ or en route
- attacking any other valuable targets of opportunity


Their mission's duration was to last 4-8 days, after which they were to be collected by Warsaw Pact Forces as these apparently advanced across Western Europe defending(?) the Eastern Bloc.


The regiment consisted entirely of 700 dedicated volunteers – recruited from conscripts eager to join the paratroops – and about 40 hand-picked officers and NCOs of exceptional intelligence and professional calibre.


All new recruits had some degree of experience with sky-diving, except for a handful of university graduates who studied western languages and managed to get through tough health and fitness tests.


I have included a photo of one of my colleagues representing a camouflaged para from the 7th Paratrooper Regiment.


I assure you that my interview with the veteran is incredibly fascinating. I hope to publish it once I am satisfied with my list of photographs that will accompany his detailed accounts. Hence why any resource material regarding uniforms and equipment that the forum members can provide or suggest will be of great help. 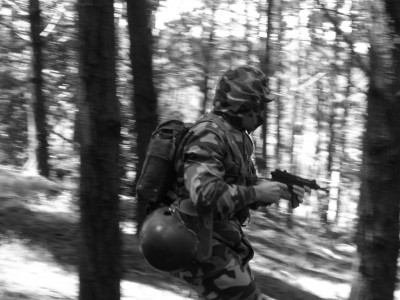 Hooded para from the 7th Paratrooper Regiment of the Czechoslovak Army.
Copyrighted Material - please do not use without author's permission.